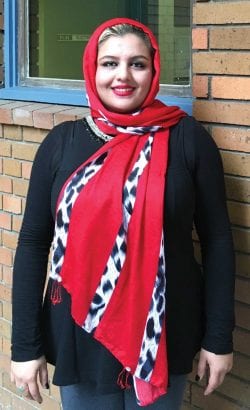 Khadijeh had been living in Iran her whole life. She was born there. Her family was from Afghanistan; they had fled their war-torn country before she was born and they had made a life in Iran. However, in 2010 the Iranian government decided the Afghani and Iraqi people were no longer welcome in their country, and Khadijeh’s family were forced to move back to Afghanistan. “We couldn’t go back because of the war and we had nothing in Afghanistan. We didn’t have a house, or even a job, and I had never even been to Afghanistan. But they didn’t accept that,” Khadijeh said.

The Iranian government set up a refugee camp for the Afghani and Iraqi people. While they were living there, Khadijeh and her family made a case for refugee resettlement and sent it to different governments around the world, including Australia, Canada and America. After two years, the Australian Government approved their case.

In 2013, when Khadijeh was 23 years old, she flew to Australia with her husband and two-year-old daughter. Her mother, father and siblings had flown in 13 days earlier. When they first arrived in Australia, they were met by an interpreter in Sydney who helped them with transportation to travel directly to Newcastle.

Settling in to Australia was difficult for Khadijeh at first. “It was really different because I didn’t know how to talk to people. I didn’t really know what to do,” Khadijeh said. Even the food was something to become accustomed to.

Khadijeh and her family started studying English at TAFE. After she finished her initial 500 hours in the Adult Migrant Education Program, Khadijeh continued studying English in the Seeking Education and Employment Program, and she also studied Aged Care at Glendale TAFE. “I had a really difficult and hard time; I was studying five days a week, three days at aged care and two days at English.” She recalls going to the bus stop at 6.30am as there was only one bus going to Glendale from where she lived. “It was really hard for me. We didn’t have a car. Every day I was getting home at 6pm. Most of the time I was going to bed with my shoes on; I was so tired I couldn’t even take my shoes off,” Khadijeh said.

“Despite experiencing years of hardship in a refugee camp, Khadijeh has overcome adversity thanks to her hard work and commitment to succeed.”

At times Khadijeh was so busy with study that she even missed religious celebrations to go to TAFE. The Muslim community celebrate Eid, and even at that time Khadijeh didn’t stay at home. “While everyone else celebrated with lunch and dinner I came into TAFE to study. Last year when I was in class, there were some ladies from my country who called me and said, “We are knocking on your door and you are not home. Where are you?!'” When she told them she was at TAFE they were shocked. “What?! Today is Eid!” For Khadijeh, studying during Eid is like Australians missing Christmas, nobody is working, nothing is open. However, for Khadijeh her study was important. “Even if I learn one or two words today, that is important to me.”

Khadijeh is studying English for Further Study at TAFE now and hopes to go to University to become a nurse. In 2016, the Hunter TAFE recognised her achievements, awarding her the Cultural Diversity Award:

Khadijeh arrived in Australia from Iran as a refugee in 2013 with little or no English skills. Despite experiencing years of hardship in a refugee camp, Khadijeh has overcome adversity thanks to her hard work and commitment to succeed. After completing a preliminary English language course she is now well on her way to completing a Certificate III in Spoken and Written English. Khadijeh has successfully balanced her studies whilst managing the commitments of a young family in a new country. She hopes to follow her dreams and become a fully qualified nurse in the future.

Once Khadijeh completes her English studies, she will need to complete an English to Further Study course to help her study at University level. She is thankful for the support from her teachers at the TAFE. “They have been very supportive.” Currently she is making a résumé to get some weekend work as an assistant nurse and get some experience.

Although the journey to get here has been hard for Khadijeh, she is proud of her efforts so far. “I have achieved my goal,” Khadijeh exclaims. “I have achieved step one!” Her next goal is to get her full driver’s licence. “I am learning to drive; I got my learner licence last year.”

Khadijeh has also been overwhelmed by the support of the community. “Everyone in Australia has been very welcoming. My mother has gained support from Penola House; and I even have some friends now who are Australian. They are lovely people, very helpful,” Khadijeh said.

Khadijeh also mentioned the amazing support and sense of community she has felt from the local Anglican Community. Khadijeh and her family have attended picnics and the Christmas Party held by Belmont North/Redhead parish community. “Marilyn (Deas) asks us every year to join them for the Christmas Party. I had never experienced Christmas before and we loved it.” Khadijeh’s mother and sister also helped with the face painting for the children.

Khadijeh encourages people and churches to offer support and help to refugee communities through offering community, friendship and support, much like the Belmont/North Redhead and Belmont Parishes. The parish not only invites the refugees to join them for picnics and Christmas celebrations, but also creates baby bundles for young parents, and has sponsored an Afghani soccer team. “The most important thing is that you are a good person, and that you want to help somebody. I don’t care if you have no religion; it’s all your personality.” 