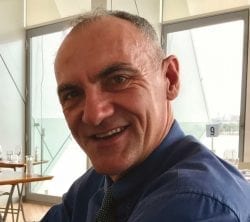 He was chosen as a finalist in the awards, recognised amongst a prestigious list of business individuals from the Newcastle region.

His ability to combine the investigative and justice skills, as well as a background in social welfare, has been essential to supporting and assisting hundreds of victims in their pursuit of justice, healing and culture change.

The Newcastle Business Club Annual Awards recognises an individual each year who has made a significant contribution toward the improvement of industry, culture, education, sport or the overall wellbeing of the citizens of Newcastle.