Saturday dawned cold, damp and grey with a wind keeping everyone on their toes. Not to be daunted, determined gardeners opened their gates and welcomed the intrepid visitors who were not deterred by the inclement weather conditions, ever hopeful that the sun would eventually shine.

In spite of the weather, the gardens glowed. The ramblers never uttered a word of complaint, just exclamations  of praise for our district and the town itself.

Blue skies and warm sunshine on Sunday, drew people from far and wide and the volunteers at all eight gardens were rushed off their feet, providing sandwiches, sausage sizzle, cups of tea/coffee, selling plants large and small, and giving talks on gardening and propagation.

Julia Hardy, who lives at ‘Buckaringa’ with her husband David, said she talked non-stop about water wise gardening, composting and being sustainable, during two vigorous days escorting visitors around her beautifully designed garden. Gardening enthusiasts were delighted with a didgeridoo recital by local artist and musician, Adrian Parker, who also spoke about his time in Kakadu and Arnhem Land, and how he came to learn to play this ancient musical instrument.

The weekend event was supported by Hunter Local Land Services which also provided an information stand in the garden at ‘Woolbrook’ owned by Rob and Jenny Lee, where visitors had the opportunity to learn about native species, weeds, tree planting and upcoming biodiversity workshops. Merriwa Landcare also generously supported the Garden Ramble.

The garden at ‘Deep Dene’, owned by Ruth Wurcker, displayed a spectacular, simply designed garden with both native and exotic species; Col and Gaye Bates’ garden at  ‘Kingslyn’ has a ‘romantic’ atmosphere with sweeping lawns and graceful garden ornaments, and ‘Bow Cottage’ owner, Bryan Baker, maintains a garden full of surprises and in keeping with the history of his 117 year old home which was once the Bow Hotel, and later the Post Office.

The town gardens were a very popular venue with colourful displays of purple, pink and white daisies, irises, columbines, carnations, pansies and masses of perfumed roses, designed and cared for by owners Shirley Hayes, Nita Tudor and Jim and Cheryl Boys. Visitors expressed their amazement at the garden colours and design, water features, skilfully created garden furniture, and views of the ranges forming a stunning backdrop to some out-of-town rural gardens.

The Anglican Parish of Merriwa, and Locum Priest, Rev’d Neville and Jane Schofield (who joined us for the weekend ramble) expressed thanks to all involved in this gardening spectacular, which provided pleasure for those who attended, and raised much needed funds for the parish. 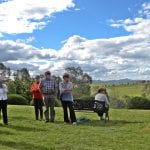 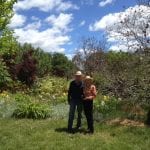 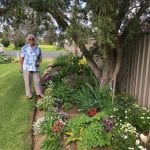 Nita Tudor in her cottage garden 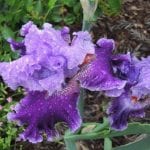