Insights: A word from our Chaplain – RAAF Base Williamtown 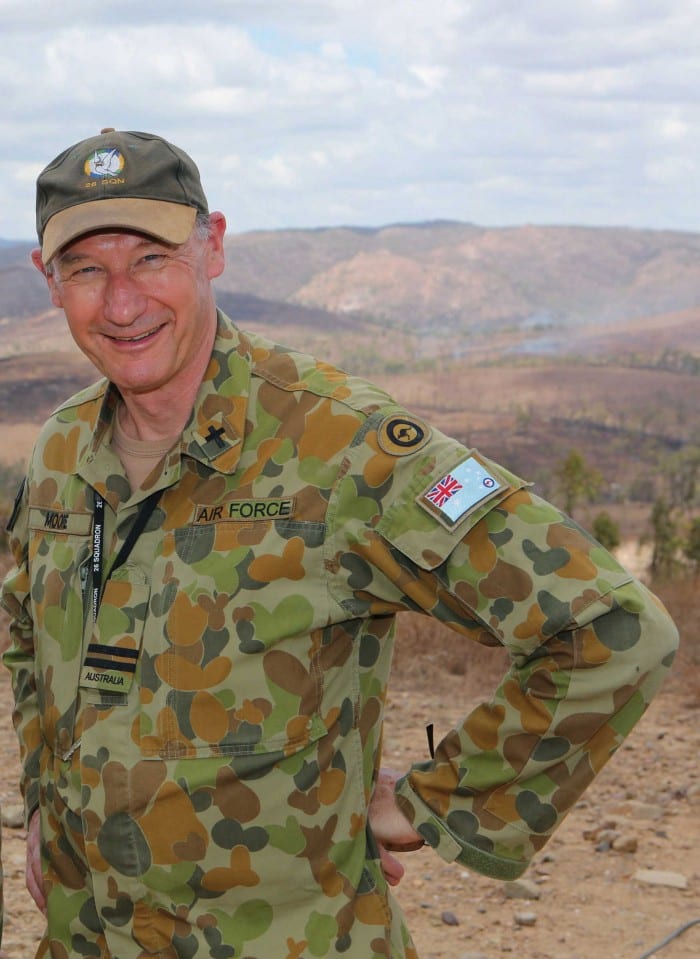 Out of the muck and chaos of war

“We can’t afford to lose you”

By The Rev’d Stephen Moore
Chaplain, RAAF Base Williamtown

For an attentive Anglican chaplain raised in the tradition of St. Francis, the ceremonial aspects surrounding ANZAC Day are combination of State-sanctioned theology blended with a sense of spirituality played out within a secular, military setting. The demands of the convening RSL can often be at odds with those who regard it as an act of worship.

From the outset, ANZAC Day was intended to be observed as a sacred occasion distinctive for its ecumenical character. Each denomination would mark the day in accordance with their theological convictions and ritual practice.

It was initially observed as a holy day of commemoration of the nation’s fallen, to be marked principally by religious services, a public march and patriotic evening meeting. There were no hotels or cinemas open, no racing or sports, nothing that could be regarded as frivolous.

The ANZAC movement, in fact, was really the Australian expression of a world-wide movement of commemoration of the millions of fallen. So we are dealing with a universal phenomenon.

John Moses, in his commentary on the theology of the event, notes that this movement, as far as nominally Christian countries were concerned, also shared a common underlying theology that was articulated, above all, by service chaplains.

As one such chaplain I have the task of explaining the ordeal of total war and of giving meaning for the comfort of the bereaved and the nation at large.

How could all the slaughter and maiming be justified as in keeping with the will of a benign deity?

Was this a divine visitation for the nation’s neglect of God and the worship of materialism in the past?

‘Certainly, the surviving populations owed the fallen a “debt of blood”‘, writes Moses, ‘and to pay that debt it was necessary to ensure that the millions had not suffered and died in vain by building a renewed society under God that guaranteed justice and equity to all citizens at home and an international order that made the recurrence of such destructive conflict impossible for the future.’

The sacredness of the sacrifice is simply assumed, as are the Christian doctrines of resurrection and forgiveness of sins.

This fits in with a uniform theme in ANZAC theology that the men died in a struggle for Christian ideals in conformity with the will of God. This helps us to understand the dominant rhetoric at the time of fighting for “God, King and Empire”.

ANZAC Day has a theology that is capable of bringing large numbers of people in touch with the sacred and holy, though perhaps not too many would say as much. Australia still stops out of respect.

The Rev’d Dr David Grulke, an Army chaplain, says given the nature of war – that is, the use of lethal force as an extension of Government policy – it is unsurprising that chaplains find a presence in a military environment.

The operational circumstance elicits demands on individuals who historically relied on the presence and experience of chaplains to create a sense of healing, self-meaning and purpose for those enmeshed within it. Emerging from the muck and chaos of war, deep questions of meaning, value, worth, identity, and life ooze from the horror of this self-inflicted, self-destructive inhumanity.

During the Vietnam conflict, a chaplain accompanied his unit on patrol through the dark, thick, rain soaked foliage of a remote jungle somewhere in Southeast Asia. As the patrol cautiously approached the crest of a hill, the men paused, sensing danger. They all recognized that they could be walking into an ambush.

A small squad, it was decided, would advance. The rest would stay back. As the chaplain began to move out with the advanced party, the young officer in charge stopped him. “Chaplain, you stay. We can’t afford to lose you. Besides, we may be needing you!” That issue settled, the young lieutenant – along with a few brave comrades – moved out, and as feared, stepped into the deadly sights of an ambush.

The parting words of that brave, boy-warrior still echo long after they were spoken: “Chaplain, you stay. We can’t afford to lose you.” As those men were facing death and eternity, a chaplain was there – there to pray for them, to face what they faced, and to serve as a living reminder of the caring presence of God. That is what chaplains in the military do.

Chaplains have played – and will continue to play – a crucial role in bringing healing to the bodies, the minds and the souls of those who have been exposed to armed conflict, genocide, mass deportation and ethnic cleansing. Always in the background are broken relationships, tension over postings, anxiety over personal fitness, risks to mental health and a myriad of other exposures that are routine in the military.

For this reason alone chaplains’ relationship with their diocese in particular and their church at large needs to be nurtured so that they can remain anchored in their faith and secure in their primary vocation as priests called to serve all in need.